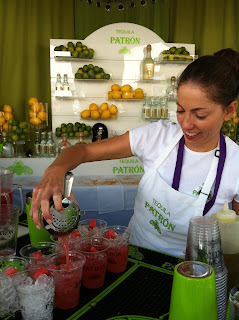 Don’t you just love sweet and juicy July watermelons?
I do, especially with Patron Tequila and a little jalapeño.
Welcome to the 2013 Food & Wine Classic in Aspen.
Now let’s start eating…..
……..and eat some more. 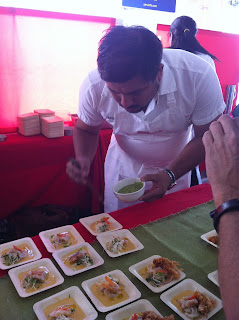 What I learned from the pros in Aspen.
Fire up the grill and prep the fresh produce – it’s summer time!!! 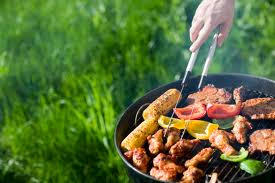 Summer meals with a bounty of salads, just picked vegetables, fruit based desserts, seafood and lean meats serve up the delicious and nutritious win-win of taste and health.  Many recipes are as easy as sliced tomatoes topped with basil, a swirl of olive oil and a sprinkling of sea salt. 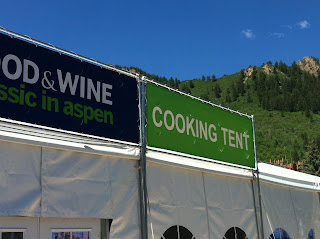 But, food fans gathered to acquire savvy secrets from celebrity chefs at the 2013 Food & Wine Classic in Aspen learned that what can look like a no-brainer actually takes some thought. 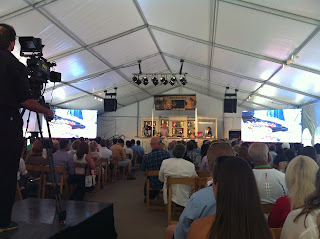 Rub, Season or Marinade?
A steak recipe or menu description may include the word ‘rub’ to describe the coating of herbs and spices added to meats but, Texas chef Tim Love warned the crowd at his cooking class, “Don’t rub it in!” 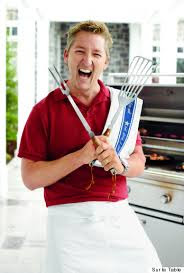 Love, executive chef and owner of the Lonesome Dove Western Bistro in Fort Worth, explained that rubbing a mixture of spices, salt and often sugar into the meat can create an undesirable crust, “They tell us rub it so we rub it. But we want to leave the pores open. Rubbing will close the pores of the meat. Then the meat won’t taste like the crusted seasonings because it stays on the outside.”  So, a rub isn’t really a rub, it’s a seasoning to spread on lightly.

For leaner cuts of beef, such as a flank steak, Love recommends a soy sauce based marinade to help tenderize, “It breaks down the connective tissue.” But, he advised against using it on expensive cuts of beef, “They’re already tender and the soy sauce will actually take away the velvetiness of high dollar steaks.”

Veggie Master
There’s something mesmerizing about watching a skilled athlete or musician perform with ease.
The same thing can be said of witnessing cookbook author and TV food personality Jacques Pepin slice an onion or peel as asparagus spear. “We’re in awe,” I overheard a fan exclaim while attending Jacques Pepin’s cooking class with daughter Claudine called Techniques to Create a Great Meal.  “He makes it look so easy, “ says daughter Claudine who adds, “He is the food whisperer.”  In less that forty five minutes the elder Pepin slices, dices, chops, stirs, whips, and whirs his way through a dozen different techniques and ends up with a roasted chicken, quick cured herbed salmon, a mayonnaise, a grapefruit segment salad and a tomato rose.  All while drinking Champagne.  (Well actually Gruet sparkling wine from New Mexico.)
“It’s a question of practice,” says Pepin who’s been a headliner for the Food & Wine Classic for many of its 31 years in Aspen. “A sharp knife is important of course but did you know that when you slice an onion with a sharp knife there are less fumes?” Another veggie prep tip- lay asparagus flat on a cutting board and use a vegetable peeler to trim off the tough exterior flesh at the end of the spears. And don’t toss vegetable trimmings. Pepin keeps an empty milk carton in the freezer and adds bits and pieces, “Keep pressing it down, adding more, pressing it down and when it’s full you can make a wonderful vegetable stock.” Cooking class in your own kitchen: Jacques Pepin’s cookbook, “Essential Pepin” includes a DVD demonstration of culinary techniques.
Basil on the Grill?
Tim Love’s meat centric cooking class on best ways to season for the grill, did allow for a little dinner time diversity when he tossed in a shrimp recipe, “Eating seafood in Texas is like being a vegetarian! But, shrimp of all seafood does love a rub.” He even grilled some fresh basil to finish the dish. “Charred basil is fantastic. So is asparagus. Yes, I’m going to talk about vegetables. I don’t want to shock people.”
Another kitchen tip from Love, think of onions as another way to add heat to a dish.
And use your grill pan to create a mélange of vegetables. Slice potatoes so they grill as quickly as other veggies on the fire.  Love’s cooking demo drink of choice? Tequila shots at 10am. And all that after he ran the Food & Wine Classic 5K run, “Check with me at 5pm today and I’ll either be a hero or a zero!”
We say hero, Tim. And in your cute words, “Damn Skippy!”
OK Foodie Fan Time!
And my friend Liz McDermott, wanted to show her son Ford just how cool she is by posing with Ford’s favorite chef Andrew Zimmern. 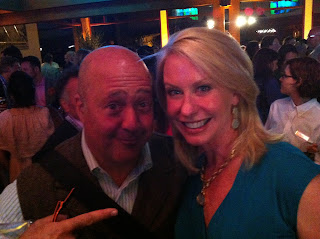 And look a Thomas Keller sighting! He is as gracious as he is talented.
As long as we’re having some fun. How about a musician in the tasting tents?
Guitarist from Train 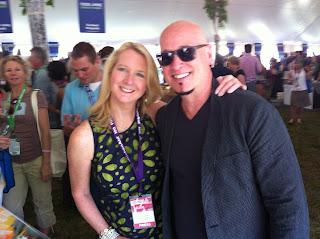 Woody Creek potato vodka is new this year, distilled just outside of Aspen near, you guessed it,
Woody Creek.  How about a sample? Gondola ride sized. 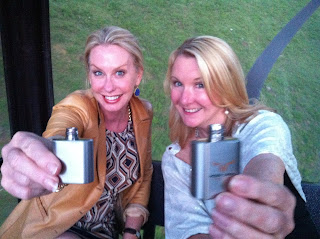 New eatery in Aspen, Above the Salt. 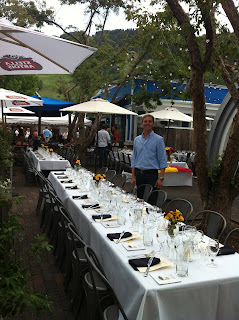 New foods, new flavors, new wine adventures and new friends at the 31st Food & WIne Classic in Aspen.
Congratulations Food & Wine Magazine for another great June weekend in Aspen.
About
Carolyn O'Neil
Award-winning food journalist, blogger, nutrition communications consultant, television personality and registered dietitian nutritionist, CAROLYN O'NEIL MS RDN LD, believes “The More You Know, The More You Can Eat!” Carolyn supports Delta Air Lines as the company’s registered dietitian nutritionist. Carolyn is the author of Southern Living’s best selling The Slim Down South Cookbook: Eating Well and Living Healthy in the Land of Biscuits and Bacon and co-author of The Dish on Eating Healthy and Being Fabulous! winner “Best Health and Nutrition Book” at the World Food Media awards. Carolyn writes for the numerous publications including Atlanta Journal-Constitution, WebMD Magazine, Modern Luxury Magazines, Atlanta Homes & Lifestyles Magazine, VIE Magazine, and Best Self Magazine. She is a contributor to Thrive Global.com. An award-winning television journalist, Carolyn is seen regularly on NBC Atlanta & Company with food and nutrition-focused cooking segments. She can also be seen as “The Lady of the Refrigerator” TV nutrition expert on Alton Brown’s Good Eats and Good Eats Reloaded on Food Network wearing a tiara and pale blue ball gown. Carolyn has earned three James Beard Foundation Awards, including Who’s Who in Food & Beverage in America. She has been honored by the National Restaurant Association, the American Heart Association, the American Society for Nutrition and the Academy of Nutrition and Dietetics for her pioneering work in nutrition communications. Carolyn was a correspondent and anchor at CNN for nearly 20 years, launching the network’s coverage of food and nutrition. Her master’s degree in Nutrition and Communication is from Boston University and an undergraduate degree in Foods and Nutrition is from Florida State University. Carolyn lives in Atlanta. Follow her on Instagram @carolynoneil
Related Posts
Copyright All Rights Reserved © 2019 - The Happy Healthy Kitchen | Hosted & managed by Omni-Solutions Technology Consultants | theme by: Tomorrow Pictures Inc.
Contact Us

We're not around right now. But you can send us an email and we'll get back to you, asap. We promise!!